What is the Collegiate Showcase? On a picturesque day at The Riviera Country Club, 13 collegiate golfers were tested not only by the difficulty of the course but by the wind. San Jose State University’s Sean Yu posted the low score of 1-under-par 70, to earn an exemption into The Genesis Invitational. Yu earned a two-shot victory over second-place finishers Allen Hamilton (University of Kentucky) and Spencer Soosman (University of Texas). Competing with Charlie Sifford Memorial Exemption recipient Joseph Bramlett on Monday, Yu would go on to play the first two rounds of the tournament with Bramlett later in the week. If at first you don’t succeed, try again. That method worked for Kentucky’s Lukas Euler who after finishing T2 in the 2018 Collegiate Showcase, earned a three-stroke victory in the 2019 competition. Euler, a junior at the University of Kentucky, posted a four-under-par 67 and was one of only two players to break par; Oklahoma State’s Hayden Wood was the other. The victory for Euler on Monday at Riviera would be a sign of things to come that week. Kentucky alumni and Euler’s Monday playing partner J.B. Holmes would emerge victorious on Sunday in the Genesis Open. 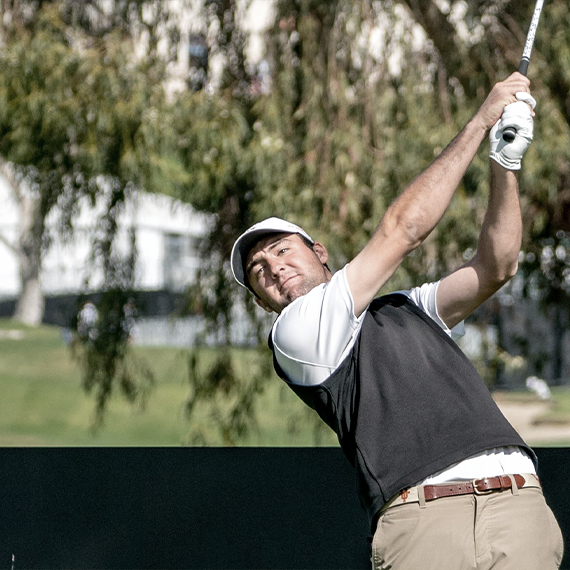 University of Texas senior Scottie Scheffler shot a 3-under-par 68 at The Riviera Country Club on Monday to win the 2018 Collegiate Showcase and earn an exemption into the 144-player field at Riviera. The start in the Genesis Open marked Scheffler’s fifth PGA TOUR start and first since he finished as the top amateur in the 2017 U.S. Open at Erin Hills, tying for 27th (1-under-par 287). Scheffler posted a six-shot victory over a trio tied in second place that included Texas teammates Doug Ghim and Spencer Soosman along with Kentucky’s Lukas Euler. Less than 15 miles from the campus of Pepperdine University is The Riviera Country Club. getting from one to the other is so easy, there are only two turns. That ease would be shared by Pepperdine sophomore Sahith Theegala as he earned an exemption into the Genesis Open by virtue of his one-shot victory in the Collegiate Showcase. Theegala would get a preview of Riviera during the week as he went on to compete in the 2017 US Amateur Championship, also held at Riviera. Theegala made it to the round of 32 later that summer, eventually falling to Doug Ghim, the tournament’s runner up. After making the cut, Theegala finished T49. With a bogey-free score of 68, the University of Illinois senior Charlie Danielson bested 13 other collegiate golfers to earn a start at Riviera in 2016. The three-under-par score vaulted Danielson to a three-shot victory over the defending champion Will Zalatoris (Wake Forest University) and Johnathan Garrick (UCLA). Danielson wasn’t done making highlights at Riviera as he followed up his bogey-free 68 in the Collegiate Showcase with a four-under-par 67 in the first round of competition on Thursday. After making the cut, Danielson finished T72. Freshmen don’t lack experience. That’s what Will Zalatoris showed in the inaugural Collegiate Showcase as he carded a four-under-par 67 to earn the exemption into the 144-player field later in the week. Zalatoris was the only player to break par and finished five-strokes ahead of Arizona’s George Cunningham who finished in second place.

PGA Tour starts are a coveted commodity for college players. San Jose State senior Sean Yu will take advantage of one at this week’s Genesis Invitational. Yu becomes the latest player to advance through the annual Collegiate Showcase and earn a spot in the tournament.

To say Lukas Euler’s golf career is trending in the right direction might be an understatement. In his second try at the Genesis Open’s Collegiate Showcase’s exemption, the Kentucky junior posted a 67 at Riviera Country Club to earn his first PGA Tour start. During The Genesis Invitational Collegiate Showcase there are two different competitions taking place. First, a college golfer is competing to earn an exemption into the 120-player field. The second contest features a pro-am style event with teams comprised of a PGA TOUR pro and two amateurs representing their alma mater. The team best ball contest awards a $50,000 donation to the winning golf program.

For more information on the Collegiate Showcase or to register your team, please contact Anthony LaFica by email or by calling 310-573-5810